From Haines to the Kenai

The road outside of Haines, AK

Once the journey on the ferry delivered me to Haines, Alaska, I still had a two day drive from Haines to Anchorage.  My brother Tommy joined me for this part of the adventure and I was grateful.  He is a forest firefighter and well versed in battling the elements of nature so if nothing else, his companionship offered me a great deal of confidence that we could overcome any challenges we faced along the way.  He flew to Juneau and bored the ferry when it docked.  It was just a short ferry ride from Juneau to Haines and then we were on the road.

The first thing we encountered was the Bald Eagle Preserve.  Jackson, Tommy’s son, gave him Baldy, his stuff bald eagle to accompany Tommy on his trip.  Jackson wanted him to take Baldy with him so he could visit his cousins in Alaska so our first stop along the way was to the Bald Eagle Preserve so Baldy could do as Jackson wanted.  The preserve was just outside of Haines so it was a short drive.  There was an area for cars to pull over so that is exactly as we did.  Tommy pulled the car onto the icey pull off and we carefully got out of the car.  After a few tenuous steps on the ice, we stood before a clearing in the trees where we saw a sea of bald eagles. 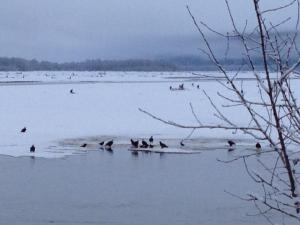 After snapping some pictures of Baldy with his cousins, we were ready to head out.  Tommy headed on to the car as I started to step off the snow bank I had been standing on.  It wasn’t a large snow bank by any means which would prove to be lucky for me.  As soon as my foot hit the ice, it slid backwards.  The top part of my body propelled forward and in a split second, I was sliding on my belly across the ice.  I had only been in Alaska for a short bit and already took my first fall on the ice.  As I carefully picked myself up, I found myself hoping that this was not an omen of how the rest of the trip would go.

Once we were back on the road again, it wasn’t long before we were crossing the border into Canada.  We pulled into the Canadian border patrol and saw cars, most of them belonging to folks that were on the ferry with us, forming two lines.  At the front of each line was a Canadian Border Patrol Officer.  One of the officers was a woman wearing a thick jacket and gloves.  The other one was a large man wearing a short sleeve shirt with the sleeves stretching tight across his large biceps.  We were waived forward by the man whose shirt stretched just as tight across his muscular chest as his sleeves did across his arm.  I asked him how he could be in the 0 F temperatures with no coat on.   He smiled, told me it was a warm day and asked us where we were heading.  I explained we were heading to Alaska.  He asked me why I was heading to Alaska and I explained I had just taken a job with Kenai Peninsula College to help open their new residence hall.  He joked with us a bit about the crazy things college kids do and then waived us on our way, wishing me good luck in my new job.

For the next three hours we drove through the Yukon and then had a very different experience with the US Border Agent when we crossed back into Alaska.  The US Border Agent sat inside a warm building and talked to us through a window.  His look was very sour during the entire interaction.   He asked us where we were coming from and where we were going.  He asked to see our passports and registration for the car and as we were putting them in the metal tray that extended from under his window, he wanted to know what business we had in Alaska.  I told him about my new job as he looked through the documents we put in the tray.  He asked about the car registration again to which I explained that I lived in Oklahoma they didn’t issue car registrations so I provided him with the bill of sale for my SUV and a tax receipt from Oklahoma.  That seemed to settle the matter.  After a few more questions about whether we had any alcohol or illegal drugs in the car, he gave everything back and without ever having cracked a smile, sent us on our way.

We had planned to stop in Tok for the night but the drive from Alaskan border to Tok was quite deceiving on the map.  What looked to be a drive of a few hours on the map was literally twice what we expected.  This was in part due to underestimating the size of Alaska and in part due to the icey conditions of the road that had us driving slower than the speed limit.  We finally pulled into Tok about 9 pm.  We were both exhausted so after checking in.  My brother hooked up the oil pan heater in the hopes it would be enough to keep the car warm enough in the -30 F temperatures that it would start in the morning, and then we climbed into bed.  We were both fast asleep on lumpy beds by 930 pm.

The next morning we woke up, started the car up and gave a sigh of relief when it started up.  We left it running while we enjoyed breakfast with the folks from the ferry.  After breakfast, the ferry party went separate ways with most folks heading to Fairbanks.  We headed south toward Anchorage.  Unlike the day before, we were making good time and actually made it to Palmer before the sun set.  Another few hours the next day and we were in Anchorage where my brother and I parted ways.  He prepared to head home while I spent a few days in Anchorage visiting the University of Alaska, Anchorage.

I ended up cutting my visit in Anchorage a bit short due to on impending storm that would make travel from Anchorage to the Kenai dangerous.  I left Anchorage a few hours before the storm hit in Anchorage and managed to stay ahead of it all the way to Sterling where I pulled into the driveway of the place I would call home for a while.